Primer for Prince of Peace Masses 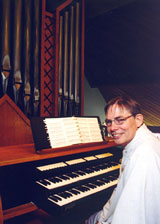 The musical mass at Prince of Peace can come as a surprise to visitors and new members. Everyone else seems to know the music, but it is not even in the hymnal! To improve the awareness of the mass, Ray Lowe and others have recorded some of the masses that have their origins at Prince of Peace. Click on the audio files below to listen to these selections.

Music for these masses from Prince of Peace is available for download below. The masses are offered as PDF booklets (Adobe Acrobat or a similar PDF reader is required) that include the scores for the organ (or other instruments used in the mass), the choir, and the congregation. The scores have been arranged in the order of the appearance in the liturgy (Kyrie, Gloria, Doxology, Holy Holy Holy, and Fraction Anthem). Note that not all of these elements are present in any given mass. For a given element of the liturgy, e.g., the Gloria, the scores are ordered organ, other instruments, choir, and pew (congregation). When the choir score is the same as the congregation score, only the pew copy is present. We hope that others will find these musical offerings useful and inspirational.

Music based on tunes from the Southern Harmony.

A mass for festive occasions. Parts for trumpets and timpani as well as organ and choir.

If you have handbells, this one is for you. A mass developed around the peal of bells.

A mass based on drums and African rhythm. For a service of joy!